One of my favourite authors is Thomas Mann. Reading his novel Der Zauberberg (The Magic Mountain), I once completely lost track of all my surroundings. I was reading the book while riding the tram. Not only did I miss my stop, I missed the following stop, and the stop after that. I missed the last stop. When I looked up from the book, I found myself in an empty car in the tram depot. No other book has ever done anything like that to me. Thomas Mann won the Nobel Prize for Literature in 1929. A few years later, he fled Germany after the Nazis rose to power and went on to live in Switzerland and the United States. He was a refugee.

One of my favourite scientists is Carl Djerassi, who died earlier this year. He received his PhD in Chemistry at 22, and went on to develop the first version of the contraceptive pill. Later, he became a professor of chemistry at Stanford University. He also had a whole additional career as a novelist and playwright, often exploring the complicated relationship between science and society. His amazing career unfolded in the United States, where he had arrived as a teenager in 1939. He was a refugee.

One of my favourite social scientists is Marie Jahoda. Her 1933 study about the long-term unemployed in the Austrian village of Marienthal explored in great depth the psychological consequences of economic hardship. It also set new standards in research methodology, combining a range of qualitative and quantitative methods to generate a dense and rich picture of the situation. A political activist as well as a scientist, she was jailed for nine months by the Austro-fascist regime in 1937, after which she fled to the UK. She was a refugee.

Here is a book by Sir Karl Popper (a refugee): The Logic of Scientific Discovery.

Here is a picture by Marc Chagall (a refugee): 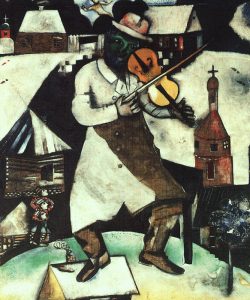 Here is a song by Kurt Weill (a refugee) and Bert Brecht (a refugee), sung by Lotte Lenya (a refugee):

I could go on, of course. All those people, all their stories, their talents, their contributions to the world. But where am I going with this?

Hundreds of thousands of people have come to Europe as refugees over the last weeks and months. They have fled a war-torn country, they have left their houses and their riches and their friends and their jobs behind, they have risked their lives marching overland or crossing the sea in flimsy boats. They are facing obstacles and walls and fences and bureaucracy, and hate-speech by politicians who, frankly, should know better.

Now, am I saying that each and every one of them is going to be a Nobel-winning novelist, or a brilliant scholar or a fantastic artist? Of course not.

But I think it would help us, in thinking and speaking about those hundreds of thousands of refugees, to recall the stories of other refugees. Refugees whose life stories we know. Most often, the stories of refugees that we know are those passed down in families, and those of famous people who also happened to be famous people. They make us understand that each and every refugee has interests and talents and things to offer to the world, is not only a refugee, but a daughter, a father, a science enthusiast, an avid reader, a lover of plants, a soccer fan, is, in short, a person with a story to tell. And we should find ways to listen to those stories.

Imagine the following situation. You are at a party and chat with someone you’ve just met. You start talking about what you do and what you are interested in. You say something like “I like statistics, and especially how it applies to solving biological problems.” The person you are talking to smiles brightly and then says: “Fantastic! Have you tried braiding your hair?”

END_OF_DOCUMENT_TOKEN_TO_BE_REPLACED

Recently, I received an e-mail. Andrea and Noah are very happy to welcome little Ethan. He was born on November 12, is 52 cm tall and weighs 3300 g.

I never understood why parents always announce the height and weight of their new-born baby. Maybe it is because, even though that new little person takes up each of the many (many!) waking moments of their lives, they actually don’t know all that much about them. So they stick to the basics: name, date of birth, height, weight, until they figure out who little Ethan really is.

Meanwhile, I have a different, yet related question: Who the hell are Andrea and Noah?

END_OF_DOCUMENT_TOKEN_TO_BE_REPLACED

So, in August, I participated in my first tadoku (extensive reading) challenge. This is a brief update on what I learnt and why I am doing it again in October.

END_OF_DOCUMENT_TOKEN_TO_BE_REPLACED

I have always loved reading (well, ever since I’ve been able to read. Before that, I loved being read to. And before that, I can’t remember). And I have always had the suspicion that reading has helped me learn languages – first my own, and then others.

Now, when reading in a foreign language, I don’t have a dictionary by my side. I tried at first, but I found it tedious. If I don’t understand a word or a sentence, I’ll just read on. Maybe I’ll understand the next. Or not. But here is what I think: If a word is not important to the story, then it does not matter anyway. If it is important, it will likely show up several more times. If that happens, then its meaning will probably become clear from the context. If it does not become clear from the context but is obviously important, then at some point not knowing the meaning of the word will become sufficiently annoying, and I will finally get out the dictionary and look it up. This rarely happens, however.

For a long time, I have thought that this method of reading is just me being lazy. Turns out, it’s not. It is, in fact, a thing.

END_OF_DOCUMENT_TOKEN_TO_BE_REPLACED

One thing I like a lot is languages. In fact, I have started taking Dutch classes at the beginning of the year, and it has been very enjoyable. Recently, my teacher has introduced a new kind of homework: Writing short essays. The first one involved describing my work.

Now, this is hard. First of all, I haven’t learned a whole lot of words yet. Second, they are words from my Dutch textbook, so they are chiefly intended to help people go about their day-to-day lives in the Netherlands. (“Hello. My name is Joop. My bicycle is broken.”) Nothing there (at least not in lessons 1-15) about, say, computational neuroscience. Or synaptic plasticity. Or Calcium signalling. At first, I was a bit frustrated, because my limited vocabulary does not allow me to say the things I want to say.

But thinking of it some more, I was reminded of several things at once: My early days of learning English, the Up Goer Five and Oulipo. Bear with me, I’ll explain.

At age 10, I started learning English in school. On one of our first written tests, we had to translate into English a little dialogue where someone tells a friend about his new cat. The friend asks: “Is it male or female?” Now, “male” and “female” are difficult words, and most students could not remember them (or even remember that we’d learned them in class). A few got it right. But they were not the most impressive. The most impressive students were those who had forgotten the words, but still found a way to say what they wanted to say. A few wrote: “Is it a He or a She?” and one, rather ingeniously, asked: “Is it a Mr or a Mrs?” What I learned that day was that not having the necessary words is not an excuse. You just have to find another way of saying it.

This is exemplified rather marvellously by this xkcd comic, where a Saturn 5 rocket is described using only the one thousand (or, as the comic says, “ten hundred”) most common words in the English language. It is fantastic! If you want to try this kind of stuff yourself, there is an Up Goer Five Editor you can use: Enter any text, and words that are not in the most common 1000 will be highlighted, so that you know to replace them with simpler words. You can also read texts other people have posted. Some describe their work, some give synopses of movies, some even re-work poems or songs. Some of these texts are absolutely awesome, as if restricting the authors to a limited vocabulary had unlocked an enormous creative potential.

This is not a new idea, of course. In the 1960s, the French literary movement Oulipo did exactly the same thing: Authors invented rules or constraints, and then tried to write texts following these rules. At the height of the movement, Oulipo superstar George Perec published “La Disparition”, an entire novel without the letter e. (You should read it, it’s fun! If you can’t read French, fret not. There are at least seven translations into other languages, all of them without the letter e. The English translation is titled A Void).

So, if limiting yourself to a restricted version of the language is good enough for my middle school class mates and for xckd and for George Perec and his friends, if it even made them better, more creative writers in some way, then I should stop worrying about not knowing much Dutch and just embrace the creative challenge.

I am sure Mr Cat would agree.